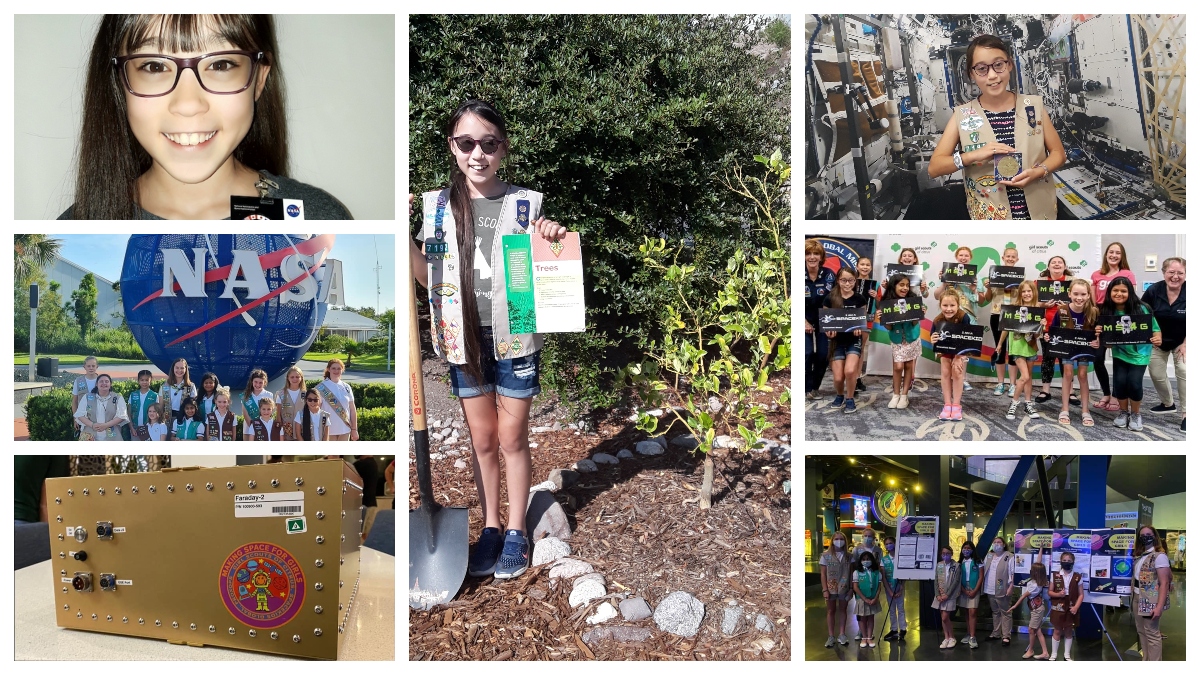 For years, women have been underrepresented in STEM (science, technology, engineering and mathematics) university courses and occupations. Studies have repeatedly reported that math and science are perceived as male domains, and scientists as predominantly male. Findings also suggest that gender-science stereotypes of math and science can potentially influence young women’s and men’s aspirations to enroll in a STEM major at university. Don’t bother sharing any of this with iLEAD Agua Dulce 7th Grader Jordan Diem. She’s defying all of the standard stereotypes and perceptions.

Jordan recently returned from a trip to SpaceX where she was part of a Space Kids Global. She and her team were invited to participate in a National Challenge from Girl Scouts called Making Space For Girls that allowed her to be part of the recent launch of the CRS-23 Mission. Jordan, who had to submit a proposal to the program and have it accepted as part of the launch, created a mock Faraday Box (a device used to block electromagnetic fields using conductive materials on their surface to redirect electromagnetic waves) that included some biologicals, a raspberry pie and a camera. The intent of the camera is to have a picture taken every 24 hours that is fed back to Houston.

Jordan’s space journey began as a 5th Grader when she participated in DreamUp To Space. In her second year as a 6th grader, Jordan was a semi-finalist. Then, due to her participation in Girls Scouts, she was made aware of the opportunity to submit a proposal to NASA as part of SpaceKids Global.

In Girl Scouts, young women of every age learn about science, technology, engineering, the arts and math in order to help them see how they can actually improve the world.

“With Making Space For Girls, our girls see that space exploration and technology are not only accessible, but also rewarding,” said Theresa Edy Kiene, the CEO for Girls Scouts of Greater Los Angeles. “This has inspired our girls to pursue passions in STEM, which is foundational to the Girls Scouts leadership experience.

Jordan indeed seems inspired and also wants to reciprocate that inspiration. She proudly says that science and math are her favorite subjects. Her career goals are focused on being a zoologist and protecting the health and safety of animals. Additionally, she is also very passionate about natural remedies, aromatherapy and homeopathic practices. Ultimately, however, Jordan said her intention through all of this work is to inspire other young scientists, especially young women like herself.

“I want to inspire other learners that they can do anything that they set their mind to,” said Jordan. “Working with my teammates, as well as all of our partners was really inspiring to me.”

For Jordan’s mother Tina, this work too has been inspirational. She said Girl Scouts hosted an incredible weekend for these young female scientists. Tina said that she was so inspired by the interest and dedication displayed by all of the partners in this process.

“I am so encouraged to know that Girl Scouts and SpaceKids Global are fully dedicated to ensuring that Girls feel accepted into the worlds of math and science,” said Tina. “I truly appreciate the efforts from entities including NASA, ProXops, L2 Solutions, Space Station Explorers, and ISS U.S. National Laboratory supporting this mission.”

Those that have watched Jordan’s dedication, skill and passion continually grow are also impressed with this young citizen scientist. iLEAD Director of STEAM Initiatives Kathleen Fredette said that she is very impressed with Jordan and inspired how Jordan embraced this unique Making Space For Girls opportunity with the Girl Scouts.

‘It’s so amazing to see someone bring their prior knowledge and willingness to learn to new things to a challenge like this,” said Fredette. “Jordan has shown us all that reaching for the stars is how we grow and achieve.”

iLEAD Agua Dulce Director Lisa Latimer concurs. “I am incredibly proud of the grit and stamina that Jordan has displayed throughout the project,” said Latimer. “She is a true leader on campus and brought her leadership skills to accomplish something spectacular.”

Jordan’s immediate plans are to participate in a Citizen Science Project where they will make kits for other young learners where they can keep ants, hatch brine shrimp and grow plant seeds at home all while comparing the progress daily with images sent from the Faraday Box on the International Space Station. Jordan is also excited about upcoming science and other work in 7th grade at iLEAD Agua Dulce. She said she is looking forward to working with her facilitators in the Agua Dulce garden and other related work.

“I am excited to be back on campus and looking forward to more hands-on science and math projects this year,” said Jordan.

Can you imagine being part of a team that sends an experiment to Space? Apply to Join a DreamUp to Space Launch Team! All 4th-12th grade learners are invited to END_OF_DOCUMENT_TOKEN_TO_BE_REPLACED